A microscopic examination of the eye, for example with optical coherence tomography (OCT), shows a surface fold of the macula. The cause of this folding is a thin cellophane-like membrane that grows over the inside of the macula and, due to its contractile properties, leads to a pucker of the otherwise smooth inside of the retina at the point of sharpest vision, namely at the macula. Other names for the same clinical picture include epiratinal gliosis or macular membrane. 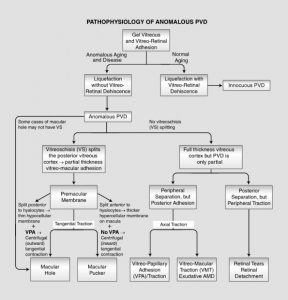 Foramen is the medical term for a hole. If a hole appears at the point of sharpest vision, this means that the central visual acuity is severely restricted. With the OCT, this opening of the optic pit can be shown exactly and its extent can be precisely measured. This precise representation forms the basis for deciding whether surgical therapy is an option. In the surgical procedure, an attachment of the vitreous is removed and, in most cases, a membrane lying on the macula is removed. Filling the vitreous cavity with gas and storing it for a few days after the operation are necessary to create the conditions for closing the macular hole. (Prof. Koss gave a lecture on this at the annual meeting largest meeting, the AAO, in the world in November 2019 in San Francisco).

If you experience symptoms such as flashes of light, streaks, soot rain, shadows or similar, see an ophthalmologist as soon as possible to check if you have developed a retinal tear.

In order to avoid further progress in retinal holes up to retinal detachment, these retinal changes are treated with a laser or with cold, in order to strengthen these weak points through scar formation.

These treatments should be carried out at short notice. This usually avoids major surgical intervention.

If a retinal detachment has already been formed, this critical situation can only be dealt with by surgical intervention (seal surgery, pneumatic retinopexy, vitrectomy). The timing and the choice of the intervention depend on the individual situation. The surgery is usually carried out within a few days.

However, careful preparation for the operation is more important than a hasty surgical procedure.

Often, a certain positioning of the patient before surgery can improve the anatomical situation.

Since the course of healing in the event of retinal detachment can also be complicated in spite of the operation, it is all the more important to see an ophthalmologist for short-term symptoms that may indicate retinal damage.

Approx. 80-90% of retinal detachments can be treated with a single operation. Follow-up procedures are necessary in some patients to stabilize the retina.

Symptoms that may indicate retinal detachment:

At the point where the retina detaches, a loss of vision is noticed. Only when the retina is back on it can resume its function.

A dark shadow can indicate retinal failure. This shadow appears on the edge of the visual field and can grow larger over time. Ultimately, the affected person would no longer see anything if the entire retina were to become detached.

The rate of retinal detachment can vary widely. Sometimes the course can be so dramatic for the patient that vision on the affected eye is lost within hours.

Fortunately, the retinal tissue is supplied by its own vascular system, so the tissue remains intact. When the retina comes again into contact with the underlying pigment layer of the eye, it resumes its actual function.

Pain is not one of the characteristics of retinal detachment because the retina has no pain receptors.

A swelling of the macula (macular edema) can have different causes. Macular edema is most common in diabetes, vascular occlusion (e.g. occlusion of a branch of the retina or the central vein of the retina), chronic inflammation (e.g. chronic uveitis), sometimes after surgery, e.g. cataracts, retinal surgery, glaucoma surgery.

Macular edema after surgery can usually go away completely after treatment. Macular edema due to circulatory disorders can occur several times and then always require new treatment.

The optical coherence tomography (OCT) is usually used for diagnosis and thus often avoids having to perform fluorescein angiography.